"There is no situation, no age, no condition, where exercise is not a good thing"

As practitioners of Lifestyle Medicine we aim to ‘go upstream’ with our patients and, where possible facilitate behaviour change, or at least start the process of perspective shifting1. We start with ourselves, and it tends to take over.

As mentioned in my previous blog post ‘Rediscovering the Joy of Movement’, physical activity is my favourite pillar of health. In the words of Professor Chris Whitty ‘there is no situation, there is no age, and no condition where exercise is not a good thing’2 (although I’m careful not to use the word exercise as it tends to lead to eye-rolls from my patients).

I work with a largely deprived patient population, full of challenges, and when we focus on physical activity, our patients are at the bottom left of the WHO sedentary lifestyle graph3. This means that any move in the right direction is on the steepest part of the curve – with the biggest relative gains.

My enthusiasm bubbled over when I saw an opportunity to sign up for the RCGP active practice charter4. This required evidence of how we have encouraged increased physical activity and reduced sedentary activity in both staff and patients, and partnered with local physical activity initiatives (in our case Park Run, Edinburgh Leisure, Spartans community projects and the Pilton Community Health Project).

Whilst I am constantly amazed by my colleagues who have the capacity to set up groups such as ‘Walk with a Doc’5 (East Lothian GP Dr Peter Churn has even started a swim with a doc group!’) our current workload would not allow this. Instead, I try to connect the dots and I was particularly proud of the walking group that started every Thursday at the practice doors, which was borne out of a connection on social media with a local greenspace charity.

When things don’t go so well…

Through our work in behaviour change naturally we end up discussing when these efforts have not gone so well. We discuss the reasons and factors that lead to these setbacks, then apply this learning to future behaviour change journeys. Sometimes we have to practice what we preach. Unfortunately due to poor attendance, the walking group that I have been so proud of has moved onwards and upwards to a more salubrious part of town. This was disappointing as I still hoped we could muster up the masses, improving social connections and physical wellbeing in an area that needs it most. However, the patients didn’t want it – it’s not part of the local microculture.

…we learn. And try again.

Success and failure are not opposites. In the words of the motivational speaker Simon Alexandro “you can’t experience success without failure – you need to seek the humility to learn from these experiences”. Later that day, when I discovered our walking group was leaving I met with our established neighbourhood community leader. They had recently managed to get a green prescribing grant with the aim of adding groups to their already well attended service. When one door closes, another one often opens. As for the learning? Sometimes the needs of the community are best served from within the community, from the bottom up. We are linking in more closely with our successful community health project now, and they are not going anywhere any time soon, having been founded in 1984.

It’s been said that you need three positives to outweigh a negative, so I’ve been reflecting on some recent more positive experiences with patients.

Studies have shown that brief interventions on physical activity do work6. I mentioned this statistic to a patient with resistant hypertension who was uninterested in my attempts to address lifestyle factors in our consultation. However, his wife had accompanied him, and she egged me on and, despite his chuckling “dinnae waste your breath doc”, I continued enquiring anyway. We identified the movement he loved was dancing to 60s music with his wife in the kitchen (who doesn’t love kitchen dancing?!). He continued to chuckle, I continued to shrug, sharing and demonstrating my story of back pain and my revolutionary standing desk. The wife was nodding me along all the while, making a gentle challenge to him as I showed them the door. When I phoned next week to follow up his opening words were “I’m your one in ten doctor – the granddaughter even had me practising ballet with her”.

We had the opportunity to run a six week small group introduction to chronic pain self-management course at the practice, based on the work of Dr Barbara Phipps and the Action for pain course. One of the group hadn’t left the house for 6 months due to pain. However, this changed, as over the weeks we grew his understanding and acceptance of pain, while other group members inspired him to explore the great outdoors (we used these local photographs in the presentations). He not only got out to his own garden for the first time, but out to the waterfront to breathe in the sea air, despite the pain. The power of group consulting.

I had one of my more challenging patients in, already on a cocktail both prescribed and non prescribed medications, requesting any benzodiazepine that I would be willing to prescribe, which I wasn’t. I’ve known the patient long enough to be blunt with him. So he gave up. Spotting my trainers under my desk he changed the subject. “I kaen you like tae run Dr Scarlett, I seen you hoofing it doon the hill ev’ry morn’. Might just try it mysel’”. Now that’s a contemplative statement if ever I heard one – and whilst I doubt he’ll be joining me on a parkrun anytime soon you just never know (at a recent BSLM physical activity group meeting we were discussing the recovering addicts who have not only taken up jogging but gone on do marathons and ultramarathons!).

So maybe at our practice we didn’t need our own walking group – there are others already in the community which we can help patients discover, when they are ready, and many other ways to increase physical activity in patient’s own contexts. Sometimes the conversation is enough to switch on that lightbulb of motivation, to turn the contemplative to action within their own daily lives. And maybe by showing not telling, running past our patients on the way to or from work, or leaving our trainers somewhere visible, by consulting from a standing desk, these natural conversation starters might just surprise you. 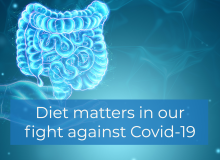 Diet Matters in our Fight Against Covid-19 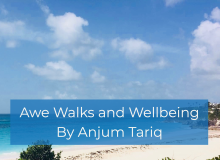 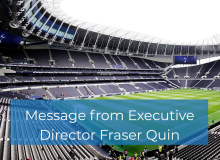 A Message from Dr Fraser Quin 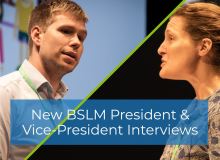