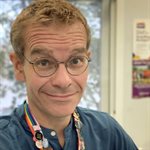 Mike Farquhar has been a consultant in sleep medicine at Evelina London Children’s Hospital since 2012, having trained in Glasgow, Nottingham, Sydney and London. Evelina London’s sleep department provides comprehensive assessment and management across the whole spectrum of paediatric sleep disorders, including the largest group of children with narcolepsy in the UK.

Mike and colleagues worked with the PSHE Association to include teaching about sleep in the English school curriculum, emphasising the importance of children and young people – and families – learning to prioritise sleep in their lives.

Mike works to improve education of healthcare staff about sleep, and the impact of sleep deprivation/fatigue on the ability to provide 24/7 NHS care. He has been awarded the Association Award of the Association of Anaesthetists of Great Britain and Ireland, and the Royal College of Anaesthetists Humphry Davy Award, for his contributions to the #FightFatigue campaign.

Mike has a strong interest in raising awareness of issues and challenges faced by LGBT+ young people, particularly when accessing NHS care. He was a lead developer of the Rainbow NHS Badge project, which is now spreading across the NHS. He received the Inspiration Award at the 2019 Proud Scotland Awards, and was named RCPCH&Us Voice Champion of the Year in 2019, for work related to the Rainbow NHS Badge project.

Mike is on Twitter @DrMikeFarquhar, with a focus on sleep, and also @RainbowNHSBadge.