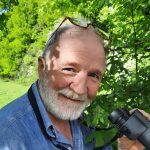 George McGavin studied Zoology at Edinburgh University, followed by a PhD in entomology at Imperial College and the Natural History Museum in London. After 30 years as an academic, mostly at Oxford University, he became an award-winning television presenter. His many programme credits include Lost Land of the Volcano, Monkey Planet, After Life: the strange science of decay, The Oak: nature’s greatest survivor, The Secret Life of Landfill: a rubbish history and The Secret Science of Sewage. After being diagnosed with malignant melanoma in 2018 he made a documentary that would reveal the science behind his disease and its treatment. The result, A Year to Save my Life: George McGavin and Melanoma was broadcast on BBC4 in June 2019.