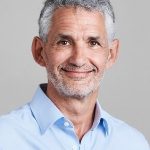 Tim Spector is a Professor of Genetic Epidemiology at Kings College London and honorary consultant Physician at Guys and St Thomas’ Hospitals. He is also an expert in personalised medicine and the gut microbiome and started the famous UK Twin Registry in 1993. He is the lead researcher behind the world’s biggest citizen science health project – the Covid Symptom study app for which he was awarded an OBE.

Through his work he has been given many awards and prizes and is a Fellow of the Royal Society of Biology and the Academy of Medical Sciences. He has published over 900 scientific papers and is ranked by Google as being in the top 100 most cited scientists in the world. He has published four popular books- including the best-selling Diet Myth and more recently, Spoon-Fed, a Sunday Times bestseller. He writes health blogs, which have been read by more than ten million people and appears regularly in the media all around the world.