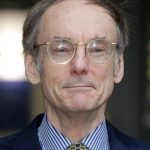 Roy Taylor qualified in medicine at the University of Edinburgh, and is Professor of Medicine and Metabolism at Newcastle University and Honorary Consultant at Newcastle Hospitals NHS Trust. He created the Newcastle University Magnetic Resonance Centre in 2006 and has focussed on developing techniques to elucidate how food is handled by the body in health and disease. Over the last 15 years he has demonstrated that type 2 diabetes can be reversed to normal by decreasing liver and pancreas fat content, throwing light on the aetiology of a condition previously regarded as complex and heterogenous.
Professor Taylor developed the method now used throughout the United Kingdom for screening for diabetic eye disease, and this has been demonstrated to decrease blindness rates in diabetes. He has produced books and other teaching aids for retinal screeners and co-founded the British Association of Retinal Screeners.
He has delivered several named lectures including the 1988 Croom Lecture of the Royal College of Physicians of Edinburgh, the 1992 Honyman‑Gillespie Lecture of Edinburgh Medical School, the 2017 Samuel Gee lecture to the Royal College of Physicians of London and to Diabetes UK: The RD Lawrence (1991), Arnold Bloom (2005), Banting (2012 and Harry Keen (2016) lectures.