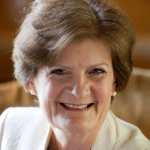 Dame Fiona Reynolds DBE became Master of Emmanuel College, Cambridge in 2012 and her term will conclude in September 2021. She came to the college after a long career in the voluntary sector, latterly as Director-General of the National Trust from 2001-2012. During her time as DG she made the Trust warmer and more welcoming, bringing the houses to life and raising the profile of the Trust’s work in the countryside.Before the Trust, she was Director of the Women’s Unit in the Cabinet Office (1998-2000), Director of the Council for the Protection of Rural England (now Campaign to Protect Rural England) from 1987-98 and Secretary to the Council for National Parks (now Campaign to Protect National Parks) from 1980-87.Fiona also holds a number of non-Executive roles. She is a Trustee of the Grosvenor Estate, a Non-Executive Director of Wessex Water, a trustee of the Green Alliance, and Chair of the International National Trusts Organisation, the Cathedrals Fabric Commission for England and Cambridge University’s Botanic Garden. She was a Panel Member for the Glover Review of Protected Landscapes, Adviser to the Building Better Building Beautiful Commission and a member of the Advisory Panel for the Dasgupta Review of the Economics of Biodiversity. She took on the role of Chair of the National Audit Office in January 2021.